We are Happy to welcome you all in Ghent!

Classes :
You have no experience of Balboa at all or maybe you've done a few taster classes here and there.


You like to work on improving the technique of your basic Balboa and Bal-Swing vocabulary. By the end of the weekend you will have more than a few new moves in your tool box, feel better equipped on the social dance floor and be able to dance more easily on a faster tempo.


You are regularly taking classes and attend balboa workshops whenever you can. You want to brush up your basic movements, learn more interesting figures, footwork variations and styling as well as making your dancing more musical.

There will be an audition on Saturday for level 2 and 3, to make sure the groups are well balanced. (more info will follow)

Maria Krohina & Alexey Gudovich (Rus)
Masha Krohina and Alexey Gudovich are the headliners of balboa in Russia. Finalists and winners of Russian and international competitions. Have been teaching regular classes in Moscow since March 2007, while constantly conducting workshops all over Russia and teaching at swing dance camps in Moscow, Minsk, Kiev, St-Petersburg. Tought classes during balboa weekends and exchanges in Switzerland, Copenhagen, Helsinki, Prague, at Rock That Swing Festival and Balboa Castle Camp.

Masha tries to expand and enrich her dance experience through all other swing dances plus salsa and Argentinian tango, Alex devotes all his efforts to balboa.
Attention to details and precision in technique, as well as an individual approach to each student is their distinctive feature.

Nejc Zupan is one of the first new age swing dancers in Slovenia. He is the founder and leader of the performing group Besne gliste and the main person behind the growing popularity of Lindy Hop in Slovenia.
Nejc’s experiences in the field of contemporary motion theatre, music and classic theatre enable him a fresh and amusing approach to teaching and developing the Slovenian swing scene. He pays special attention to Lindy Hop, Charleston, to the jazz movement and musicality, which are a sine qua non in swing.


Annas career as a dancer begins with square competitions in Ballroom und latin-american dances in her teens. Even if that doesn’t swing, it has the benefit that she is able to waltz and foxtrot before she discovers Paris’ Swing scene in 2008.
And it still adds to her repertoire today. Because Anna ist most happy when she is able to mix all the dances: Lindy, Bal, 20s Charleston, Shag, One Step, Peabody - or whatever the music is asking her to do.
Since 2010 Anna teaches under the label Brave new Swing in Berlin. She organizes Parties and smaller Workshops as well as the Balboa and Swing Castle Camp. As DJ ‘Professor Shorthair’ she only plays songs that she would have to dance to herself.
Anna likes to lead as much as she likes to follow, because she has a mind of her own. And that’s very visible when you watch her feet… 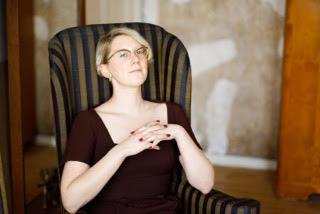 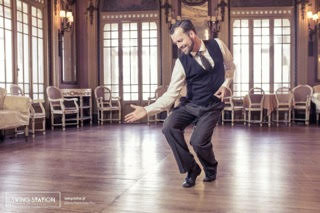 What?
It's hard to get a consensus view concerning the origins of Balboa. Many dance historians state that the dance was a derivation of Foxtrot, others believe it evolved from the Charleston or Collegiate Shag. Willie Desatoff, an original Balboa dancer of great distinction, has stated Balboa evolved from the Rhumba.
One thing is for certain -- The "Balboa" got its name from the Balboa Peninsula at Newport Beach, situated on the coast about 40 miles south of Los Angeles in California. The dance was first done at the beach Pavilion and then later at the famous Rendezvous Ballroom. The dance developed in the 1920's. By the early 1930's it had become sufficiently well known to be given its name. The dance spread up the coast through the beach resorts of Huntington, Long Beach, San Pedro, Redondo Beach, Venice Beach, and finally into the greater LA basin area. 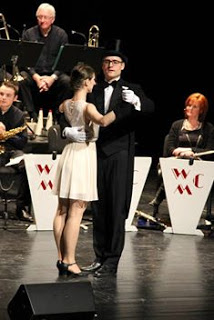 What?:
St. Louis Shag is a swing dance that evolved from Charleston. As its name suggests, it is regognized as being started in St. Louis, Missouri. It’s a very fast closed position dance that is usually done  to stomp, jump and boogie-woogie music.
https://www.youtube.com/watch?v=5phJeboD2Zo&feature=em-share_video_user


PRACTICAL INFORMATION:
You can find all the practical information regarding the workshop weekend in this doc.


All options except 5 and 6 include all parties (Friday, Saturday and Sunday)